SE wind with low cloud/drizzle all day.
I had very little time today and my only walk was hampered by constant light rain. Fortunately, Howard has just received this interesting Turnstone history.

There are good numbers of Turnstone that roost on the Helipad outer wall, I took this image during a visit last week as the birds were feeding on the beach on the receding tide, I noticed one bird was wearing a flag and luckily got close enough to get the snap. 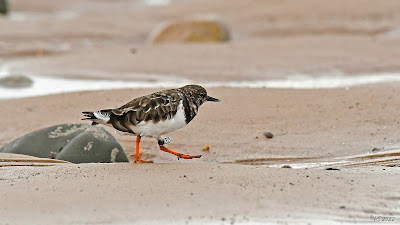 The record was confirmed today by Seumus Eaves of the Fylde Ringing Group,

re: Turnstone AW was ringed at Fleetwood Marine Lakes on 16.12.12, and was aged as an adult at the time, meaning that it was hatched in 2011 or earlier, so this bird is now at least 11 years old. After ringing in 2012 it wasn't re-sighted again until November 2016 and January 2017, and both sightings were from Fleetwood Marine Lakes. Since then it hasn't been re-sighted until last weeks sighting at Half Moon Bay.

Turnstone AW was one of just 47 birds flagged as part of a project that ran for about year, sadly it had to be abandoned because of disturbance.

Only one ringed Knot read today, whilst a good tide it was very flat so few Knot were present on the helipad, luckily out of a group of 11 there was this bird. 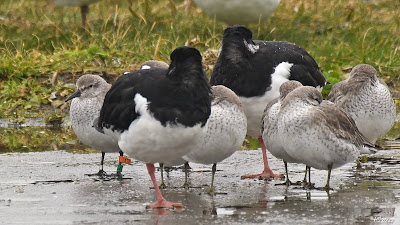 These colour ringing schemes, for many bird species (see Grey Wagtail scheme on the side bar), provide opportunity for observers to read rings in the field, although Howard is particularly good at it, with reasonable optics they can be located and read. I usually manage a handful every year . It's not about reading them for the sake of it, the information gained increases the knowledge of bird movement and can identify certain environments and locations that need to be preserved to allow the birds to continue to survive (MD).
South shore (MD)
I just managed a very short check of Red Nab and the saltmarsh, but before the saltmarsh was covered.
Pale-bellied Brent goose 31
Shelduck 35
Wigeon c240
Little Egret 2
Rock Pipits 4
Skylark 2
Reed Bunting 3
Common Snipe 5
Hopefully more tomorrow
Posted by Pete Marsh at 20:49 No comments: