All the key birds seen today

South Shore
Kingfisher 1 on Red Nab ref Janet
Wigeon - Janet took these shots of them arriving at Red Nab on the rising tide: 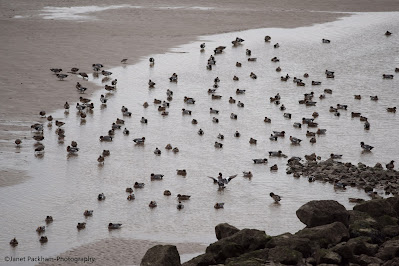 Shag 1 juvenile in the harbour - ref Pete
North Shore
Pale-bellied Brent Goose 53 - there were 16 out from the play area as I walked out to the skear (MD). A further 35 flew in at 10:30 and an additional 2 remained in the SE skear corner. Later in the afternoon, Janet took these shots as they were preparing to move off. 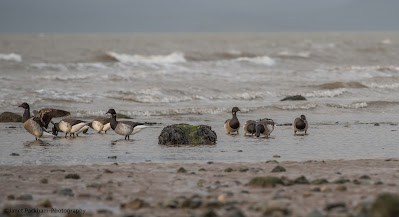 Heysham skear (MD)
Eider - c60 were well scattered today, many with accompanying gulls. I noted that it was mainly the immature, and therefore less experienced, birds that had a gull waiting for an opportunity to pinch their meal. Or, perhaps it was because the adults had things other than feeding in mind. There are two adult male and females in this clip, the second male appeared to prefer the other male's mate, but she was having none of it!
Great Crested grebe 2
Waders - mainly Oystercatcher, with Knot c1,500, Redshank c50, plus several each, Turnstone, Curlew and Dunlin. I can empathise with this Dunlin, finding a channel to be deeper than expected, I've been there so many times (including the walking away, pretending it never really happened!)
Middleton Nature Reserve
Just a brief check on the way home, I had been thinking that the wildfowl numbers were diminishing, but there was an increase today.
Mute and Moorhen unchanged
Gadwall 39 (20 on main pond)
Mallard 15
Wigeon 2 (pair)
Tufted Duck 2 male
Shoveler 2 - 1 male in breeding plumage plus one in only partial breeding plumage
Although it was only a quick lunchtime visit, there was more corvid activity than typical:
Jackdaw 15 together
Carrion Crow 2 chasing off a.....
Raven 1
Just out of the recording area:
Pete managed both the lamppost Mediterranean gull and the Sandylands Black Redstart
Posted by Pete Marsh at 20:45 No comments: