Update from yesterday.
Snow Bunting 1 male - initially just south of the recording area at Potts Corner, then flew north into our territory. Report and excellent pictures from Mark Jones.

A couple of images that I managed to grab of a lovely male Snow Bunting yesterday on my return from Sunderland point mid afternoon. It was, unbelievably, in front of a caravan just 2 away from mine, feeding on the ground, I watched it for around 10 mins before it flew off up the coast towards Morecambe. 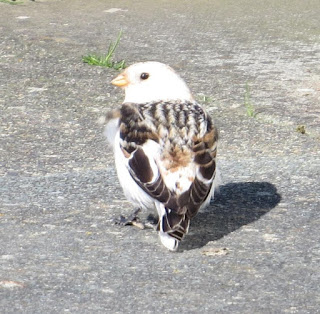 Beautiful, striking white back wing feather pattern, just a single call as it took off, easily the best views I've had of one.
Report from Jean:
Pete and I were in the area from 0750 to 0930 and saw the following:Eider 207Red-breasted Merganser 15 (groups of 6 and 5 and rest in 1s and 2s)Great-crested Grebe 9The mergs and grebes were displaying Common Gull 270Mediterranean Gull 2 x 2CYPeregrine - adult and immature targeting the waders and crows on the skear.Vis:Very little overhead.Meadow Pipit 5 singles northLittle Egret 4 north low to water following the Kent channelRed-throated Diver - a group of 10 summer-plumaged birds headed high out of the Bay then turned and flew north. In the woodland on Heysham Head no Chiffchaff were calling so previous birds must have moved through.A Tawny Owl hooted once and then it sounded like all the Blackbirds, Dunnocks etc had found it as there was quite a racket from them.A grey seal was in the near channel being mobbed by Black-headed Gulls.
South shore (MD)
Pale-bellied Brent goose 42 flew from Red Nab to Potts
Wigeon 16
Dunlin c200
This one was reluctant to leave its Red Nab rock, I got bored waiting for it to take flight and in the end almost missed it, so I've stitched two clips together.
Turnstone c150 on the Wooden Jetty
Redshank c50 each Wooden Jetty and saltmarsh
Wheatear 4 at least along foreshore, I saw 3 on the way out and 2 on return, David Talbot saw 4 later.
Jack Snipe 1, flushed from the saltmarsh at high water
Rock Pipits 1 each saltmarsh, Red Nab and Sea wall - an evening check of north side located 4 more: 1 heliport, 2 just north of Half Moon Bay and 1 near Heysham Head.
Osprey reported heading our way from Plover Scar. Unfortunately not picked up in the recording area.