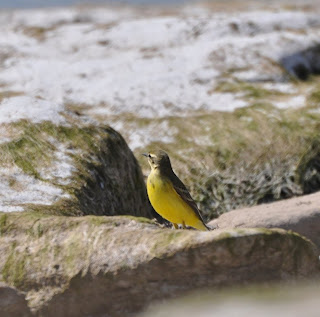 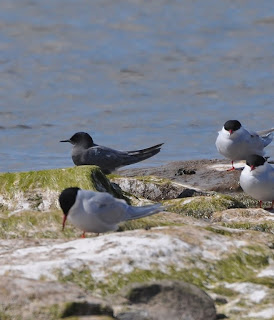 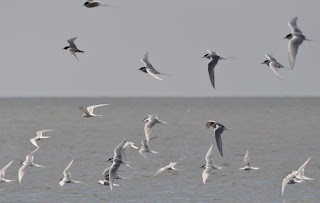 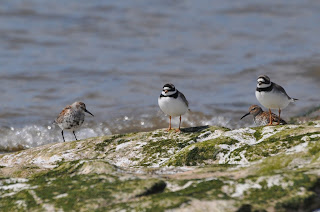 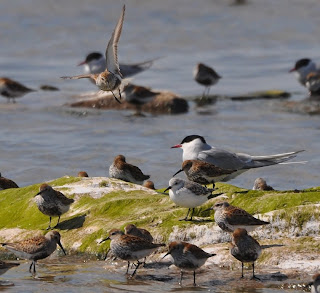 A really nice selection for Janet during the afternoon in the Red Nab area  Thanks Janet
Heysham Obs
North harbour wall and outfalls area, coordinated, almost exclusively 'inshore', watch 0600-1030
Arctic Tern - 8,153 seen in total, with all but 195 heading of north-east or east prior to 1030hrs.  About half of them headed off in situ, the rest flew in over the sea past the north wall.  c195 remained on the outfalls at 1030hrs as the tide dissipated the feeding area.  Arrival at 0600hrs saw an absolute minimum of 1,000 already in situ resting on the beach or feeding on the outfalls and observation from the south of the harbour suggested many birds either cascaded down out of the sky from the SE (including a flock of 7 Black Tern) or flew in along the tideline from the south
Black Tern - 50 recorded, mainly later in the morning as the wind went more round to the south-east:  4 'in' 0700hrs, one 'in' 0758, 5 'in' 0919, 6 'in' 0934, 7 inland 0938hrs, 4 'in' 0945, one 'in' 0955, 8 'in-off' then 'in' 1012hrs.  This left 11 on the outfalls at 1030hrs which seemed to just 'appear' in the latter half of the morning.  The number on the outfalls increased to 14 early afternoon
Little Tern - probably the same two blogging for at least an hour
Common Tern - about 13 seen, mainly blogging, but also 3 loosely attached to Arctic flocks flying 'in'
Sandwich Tern - 2
Little Gull - adult and 2CY tigether 'in' 0925
Arctic Skua - very little time to actually watch any offshore 'lines' and stuff may have been missed (e.g. Scoters and Gannets) - dm & lm 'in together 0613, dm 'in', then landed on the sea 0920.
Swallow - minimum of 84 north-east
alba Wagtail - 11 north-east (4+ White)
House Martin - 2 north-east

Moth
Just the one, new for the year in the form of May Highflyer (the one the other day was confirmed as Ruddy)
Posted by Pete Marsh at 11:27 No comments: