Shame there were no squalls this morning to spice up the seabirds and send them further into the Bay but we didn't do too badly.  Indeed I posted this a bit prematurely as the day gave new meaning to "the afternoon dropping tide being best for Leach's Petrel".  They do not seem to have a problem with mudflats and therefore low tide and lack of water is not an issue.

Pomarine Skua - juv wheeled in at quite close range at 0845hrs - didn't think there would be any juvs this autumn after my experience of the Arctic breeding season!
Leach's Petrel - one 9ish and one located off the stone jetty at 1130 and seen again 30 mins later off the north wall & see below
Velvet Scoter - male floated in with the tide during the last hour of flow with a rough sea, but hasn't been relocated as yet
Pintail - 7+5 out
Wigeon - 8 out
Shelduck - about 160 out
Med Gull - 7 behind IOM ferry (2 x 1CY, 3 x Ad, 2 x 2CY), ad red nab at same time and three 1CY already on outfalls
Little Gull - ad appeared to come in with IOM ferry but may have been the usual bird wandering 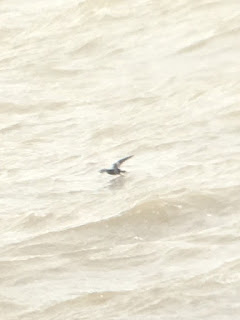 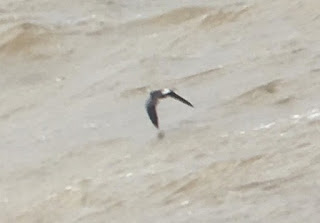 Yes well they are not easy to phonescope!  The 1555hrs bird off the north wall and this was followed by three others as seen from the SJ during the last 1.5 hrs of daylight