Nothing to push birds in overnight and a marginal wind on the tide produced very little with just one Leach’s after a cumulative 100 square miles of scanning from various VPs over four hours.  Didn’t realise IOM ferry was in business until it reached the harbour and some followers undoubtedly missed 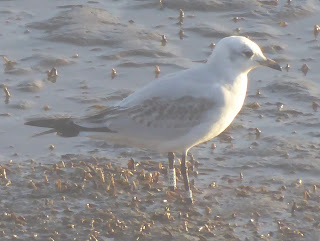 Leach’s Petrel - one cut across from north side then headed out beyond the yellow buoys
Great Skua - one flew north west through the scope as it was trained towards Knott end from ocean edge
Sandwich tern - loose gang of 13 out, three red nab and two later on outfalls in squall
Common Tern - ad behind ferry
Arctic Tern - 1cy behind ferry
Pintail - flock of three out
Kittiwake - two 1cy early on then at least seven behind IOM ferry
Little gull - usual ad red nab over tide
Med gull - min of 19 including 5 Juv red nab then 25-30 by wooden jetty including the above Belgian or French Juv and German ANLT
Guillemot - one harbour area, one dead on water
Shag - flew towards heyshsm head close inshore