West wind drifting to WNW later. Overcast all day with some light showers.
Heliport sea wall - high water
The Knot were roosting some distance from the viewing points, still, Howard managed to read one colour ringed bird.
Saltmarsh high water (MD)
The tide was almost full when I got there so most of the Common Snipe would have already been flushed, still 8 seen.
Jack Snipe 6 - always the last to be flushed, three individuals were on the shingle beach, unfortunately not seen till they took flight. Jack Snipe normally land again somewhere else along the saltmarsh edge when flushed, but not today all six left the immediate area. You get some nice views as they take off but very difficult to get a picture. These were probably my best efforts today. 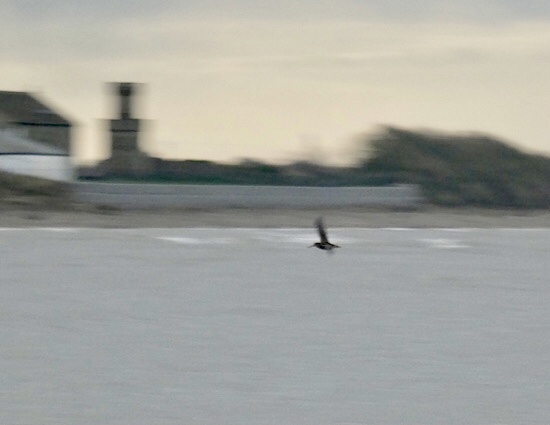 Reed Bunting 2
Rock Pipit 1
Wigeon c90
North Shore towards low water (MD)
I was tempted to say "late afternoon" but it was only 14:00 to 15:45!
Pale-bellied Brent goose 11 - I've had no reports today of any near the children's play area, and there were none there when I walked out to the emerging skear. There were 2 on the mud in the SE skear corner at 14:20. Two lots of two flew west across the bay at 15:00 and 15:20, I presumed one of these pair were the birds from the corner, although a bit surprising as the sea lettuce area would soon be in reach. There were none in the corner as I was leaving, then a flock of 7 landed right over the sea lettuce bed at 15:35 (almost dark!). I left them to it.
Guillemot 1
Great Crested Grebe 9
Red-breasted Merganser 4 (3 male)
Knot c1,000
Peregrine Falcon 1
The tide was draining quickly and the Black-Headed gulls and the Waders were catching small shrimps.  This seems very early, or perhaps I haven't noticed on other years (it is normally dark when this extent of skear is exposed in winter) but I wouldn't expect this sort of activity until the new year. The speed and depth they were pecking at the water implied they were catching lots, and quite shallow. They will have to be the first adult stage for the shrimps.
These are predominantly Black-Headed gulls (BHGs can't feed without making a racket!) but also a Common gull and a Redshank amongst them
Even Curlew and Dunlin were shrimping. Watch the Black-Headed gull mid frame in this clip, it seems to be catching at a rate, faster than one a second.
Posted by Pete Marsh at 20:47 No comments: