No sign whatsoever of the Chough unless some visiting birders can contradict here.  Predicted by two of us to be a day to go if it was going to do

The Brent Goose situation is getting out of control as regards nice neat documentation!   It does appear that the original two went (back?) across after a lengthy stay on this side and dragged all sorts of odds and ends over, some of which may have subsequently done their own thing.  However we really do have no idea how many Pale-bellied there have been, especially after today, but Dark-bellied remain at a maximum of two, reflecting their respective ratios over the Bay

No overhead passage of even the slightest note today

Brent Goose - flock of 12 Pale-bellied flew in from the north to Red Nab late am, then 15 (at least 13 clearly PBB) flew north at 1450hrs
Velvet Scoter - drake with the Eider on arrival at 0920 after which they slowly started to drift into the bay with the tide
Iceland Gull - 3rd S on waterfall early am
Eider - 377 (excluding those way north of the head at low tide (c50??)
Great-crested Grebe - 5


Middleton NR
Buzzard - two circling high on east side of unknown status as regards migrant or nearby residents, probably the latter
Little Grebe - trilling birds on two of the ponds
Reed Bunting - influx after a noticeable absence with minimum of 5
Water Rail - squealing western reedbed
NO Cetti's warbler heard
Chiffchaff - 2 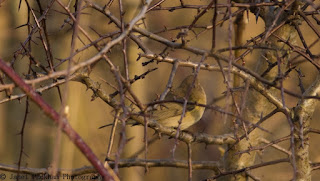 Goldcrest - at least one 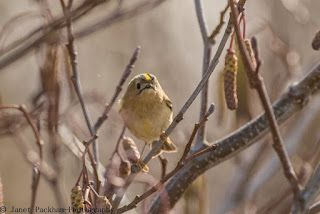