Another overnight frost with some light snow, by morning the wind had shifted to the south and with the sunshine made it feel quite pleasant (easily said when you're well wrapped up!).

Red Nab just after the tide had left it:
Wigeon 160
Shelduck 85
Rock Pipit 1
Saltmarsh
Lots of passerines displaced from inland:
Robin 7
Dunnock 4
Wren 4
Reed Bunting 1
Song Thrush 4
Blackbird 2
All seemed to be finding food easily enough.
The usual large flock of Lapwing was not present, but there were a few scattered around in ones and twos
North shore towards low water
Pale-bellied Brent goose 42 - at 13:00 there were 37 around one of the pools in the middle of Heysham skeer plus another group of 5 were further inshore. By 14:00 the 37 were nowhere to be seen but 5 were on the water along the southern edge of the skeer.
Eider c50
Red-breasted Merganser 5
Goldeneye 1 distant female type
Knot c1,000
Mediterranean gull 1 adult on the lamppost again - see post 4/01/21
Middleton Nature Reserve (JP)
Mute 2 adult 4 juvenile
Coot 4
Moorhen 4
Mallard 4
Gadwall 16 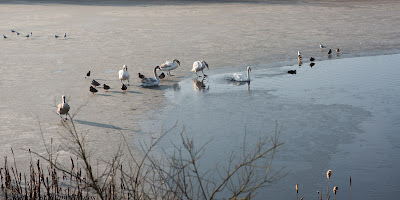 The "no swimming" pond viewed from the eastern bank 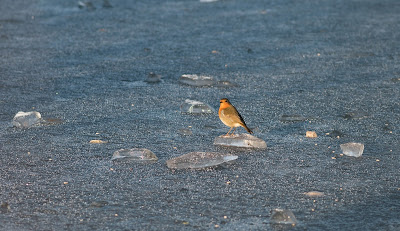 This Robin was used to people throwing food.

The Pinkfoot have been feeding in large numbers in the fields next to Heysham Moss. They left early this evening and Janet took this shot from Meldon Road.

Although this picture was taken just east of the recording area, the lead birds of this flock would have already crossed over the eastern boundary.

As ever, with Janet's pictures, it's best to "open" them to see the full detail.

Finally, this is the post equivalent of a trailer, I made myself a tiny net. The next slow news day, I'll show you what I caught with it today.