Once again the very low neap tides are restricting the feeding areas available to the Brent geese. This, combined with the easing winds, is likely to be the reason more are being tempted from the west side of the Bay. (MD)
Pale-bellied Brent goose
13:20. These 20 were waiting just west of, what little of the skeer that was exposed. 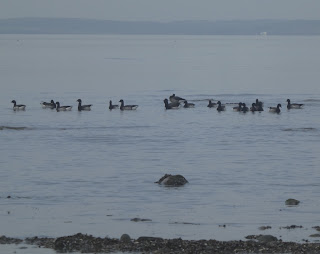 13:25. There was another group of 6 a little further north. This group of two adults with four juveniles is the same ratio as the regular Canadian ringed "family". But, there will be other family groups this size. 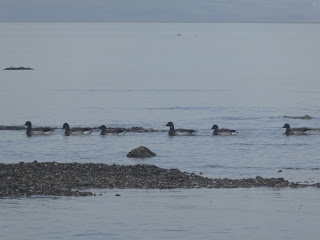 13:30. All 26 moved towards the SE corner of skeer, but there was no weed available so they fed off broken weed along the tide line.

13:55. The geese left the tide line and headed for the rocks, where there is some remaining gut weed. At this point they were joined by a further 11 flying in from the NW. So total then 37, 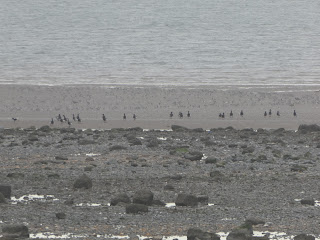 This picture is taken from the sea wall and shows the "stampede" from tide line to the inshore rocks.

16:45. A quick check out from children's play area found that the 11 must have moved on again, as only 26 were feeding. At this stage of the tide, in this location, they are finding plenty of gut weed. The tide heights start to rise again tomorrow. 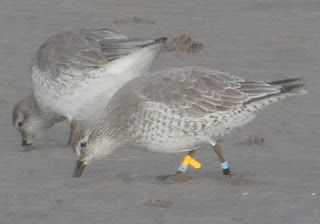 One of the Knot out from the children's play area is one of the Dutch ringing scheme. Details awaited.
Posted by Pete Marsh at 21:31 No comments: