Another, less severe, overnight frost. Technically the day was warmer too, but in the bitter ESE wind, it didn't feel like it!

The cold spell significantly affects the water temperature in the bay, particularly on these spring tides. A lot of mud is exposed to sub zero temperatures for long periods, this in turn cools the relatively shallow water when the tide comes in. The cool water is focusing the over wintering Bass around the warmer Power Station cooling water. As every wildlife documentary will tell you, a concentration of prey leads to a concentration of predators, particularly when the prey is a warm water species that becomes sluggish in cooler water. Cormorants surround the outflows and the Grey Seal was there too today.
The following excellent sequence of shots were taken by Janet, as ever you will need to open the images to appreciate the detail.
First up - the Grey Seal
Now the Cormorants
The above shots are very spectacular, but understandable, this next fishy tale is neither!
"Whitebait" is a generalisation for small fish fry that school together. I think this is a young Sprat, possibly Herring. It lays were it died, fine feathering in the surrounding mud shows it to have flipped a couple of times, before quickly succumbing to the cold air. The location is just adjacent to the creek by the saltmarsh I showed yesterday. The only way it's ended up here is by jumping out of the creek water on the early morning ebbing tide (it would have been c02:30 when this mud was exposed, next to a full creek). Again, nothing unusual about that jumping out of the water is a tried and tested escape mechanism from predators, just unfortunate to have landed on the mud. The puzzle is, what was chasing it? The traditional winter predators, Codling and Whiting would not feed in such shallow water when the tide was ebbing. The only two other candidates would be Flounder, but they are not really a nighttime feeder, or Bass, but I would have thought it too cold for them in shallow water on a freezing night so far from the outflows. Even so, I'm pretty sure it would have been one of these two, so I'll plump for Bass. (By the way, there were no tracks near by, so it couldn't have been a bird or mammal).
Other stuff:
The Merlin was again hunting a small flock of Dunlin out from the saltmarsh.
Pink-Footed goose, small flocks wandering in all directions except west
Middleton Nature Reserve
Both the Tim Butler and "no swimming" ponds are completely frozen over, but the size of the open water on the main pond has increased. 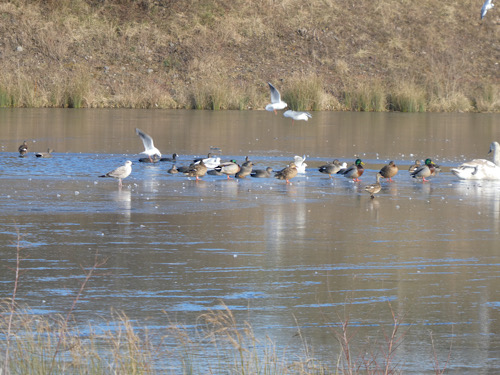 All the remaining wildfowl were using it:
Mute 2 adult 3 juvenile
Coot 4
Gadwall 24
Mallard 4
Stock Dove 2 together flying towards the golf course
Wood Pigeon 40+ resting in trees along SW border of the reserve
Posted by Pete Marsh at 20:19 No comments: