Not much moving through

Strengthening wind, starting from SSE later it moved more SE. The rain started just before lunch and continued for the rest of the day.

A very low key ringing session this this morning captured just six birds between 05:45 and 09:30.
Only two Grey Wagtails were trapped and colour ringed (out of six individuals seen). The SSE wind was not strong, but sufficient to cause the mist net to billow out and alert the birds to its presence.
Singles of Robin, Willow Warbler, Common Whitethroat and Dunnock were the only other captures plus one retrapped Sedge Warbler from the previous morning. Lack of birds and increasing wind strength caused the session to be cut short.

South shore (MD)
Rock Pipit 3 on Red Nab in the morning, 2 near wooden jetty in the evening.
Sandwich Tern 1 adult on Red Nab in morning 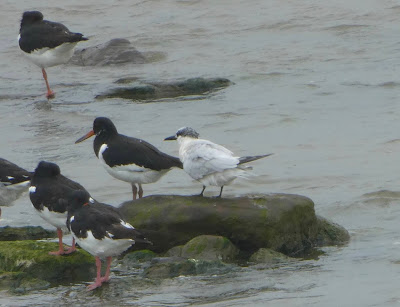 Mediterranean gull - I was a bit late getting to Red Nab this morning, any Meds that may have been roosting there were long gone. The were two juveniles flying south from No.2 outflow.
Analysis of long term feeding trends plus the recent decline in the number of feeding birds near the wooden jetty, suggested that today would be the first, in this cycle, when the sand mason worms would not be available. It was teeming down in the evening, but I donned waterproofs and went to check. The irony wasn't lost on me to be delighted to find the beach deserted (just two Oystercatchers). I am not expecting the worms to be readily available again till about the 11th September. I'll keep an eye on the beach, but perhaps not in the pouring rain!
1 juvenile on No.2 outflow in the evening.