Very light variable breeze during the morning, almost breathless in the afternoon.

Had a ringing session at the new feeding station at Middleton NR. The Blue Tits love it! Out of a total of 46 birds caught, 32 were Blue Tits.

Blue Tit 32 (half from this year and half from previous years,  the oldest being 4 years old)

Great Tit 7 (1 from this year and 6 from previous years, the oldest being 6 years old)

Blackbird 1 (an adult female ringed as a youngster in 2019)

All the retrapped birds had been ringed at Middleton and some had been caught each year, so they are very site faithful. Using a formula known as "Single Session Mark/Recapture Method" it suggests that the total number of Blue Tits on the site is around 240. I couldn't work it out for the other species as none were caught in the same session.

Pale-Bellied Brent goose 4 - including two Canadian ringed birds. This is what the title refers to. There are almost 300 Pale-bellied Brent over wintering at Walney, some, particularly later in the winter, fly over to feed at Heysham. The only other sighting so far this winter was 11th November. That was a 2.53m low water, today it was almost identical at 2.57m. Both sightings in the same location, the SE corner of the skeer.

VDRB and VTRB ringed as an adult on Axel Heiberg island, Canada 2/08/14. This is their third successive winter visit to Heysham 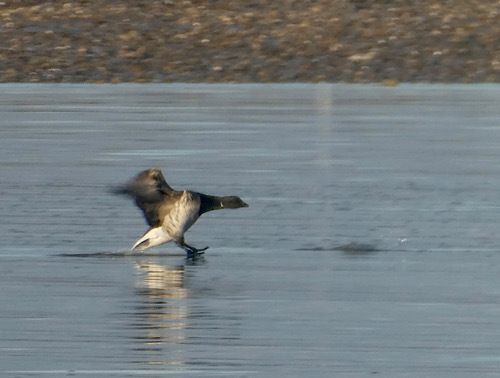 Something spooked them into flight, but they just did a short circle and landed back, quite close to me (it's an advantage when the sun is behind you).

And finally, for the more romantic amongst you