This was very much a starting from scratch morning with zero around small migrant-wise yesterday.  Therefore initial impressions of nowt around the office soon changed when the more 'arrival-type bushes' were visited below the old Obs Tower site by Jean.  Almost certainly two Yellow-brows and 6+ Goldcrest and at least one Chiff was the verdict 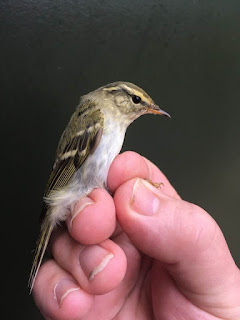 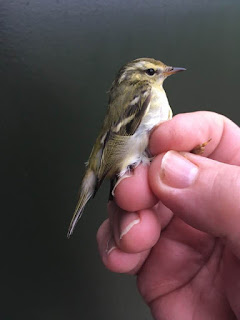 This worked a treat with six migrant warblers caught, including two Yellow-browed Warblers, before the gap in the rain closed and the net hurriedly taken down

Later a circuit of the reserve produced a third un-ringed bird in the far north-east corner for Jean but not a lot of other migrants.  Later on one of the ringed birds joined the un-ringed bird in the NE corner. Then Malcolm located one by the white barrier at the southern end of dog walk track. This multiple YBW arrival in rain, but not vast numbers of anything else also happened with the first records in autumn 1985.

This was going through the motions on a day of clear westerlies we wouldn't usually have touched with a barge pole.  Beggars can't be choosers in the current weather although tomorrow looks tasty apart from the rain.  As it happened it was marginally entertaining including high-flying Magpie action.