A day of unsynchronised seasons


ust out of the area - a Large Heath was photographed on Heysham Moss in one of the few areas not affected by the recent fire devastation........but why is it out a month early? 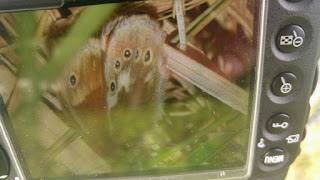 Mediterranean Gull - A 3Cy male was displaying to an adult female on the mudflats next to Heysham two outfalls - very early for this age class on ??autumnal dispersal and they should surely have already found a room in a BHG colony?

The third record of note was a flock of 17 Canada Goose adults floating in on the tide.  What on earth are they doing?

Nothing else of note on the outfalls but BHG were 700+ all seemed to be 2CY.  Watch this space!
Posted by Pete Marsh at 12:12 No comments: