Quite a lot going on - if you have varied interests.

Hot and largely sunny, gentle breeze predominantly from east, but it, perversely, briefly switched to west during a quick early afternoon check of lighthouse area.

Ocean Edge shore 09:00 - high water (MD)
These neap tides do not cover the mud flats. A large flock of gulls roosted just out from the saltmarsh.  All the local gulls were represented: Great and Lesser Black-Backed, Herring, Common, Black-Headed and Mediterranean (at least 12, almost certainly many more. I only had x6 binoculars and didn't go too close)
There was more activity at the water's edge, out from the foreshore.
Bar-tailed Godwit 19
The godwits eventually flew south towards Potts corner

All the birds were flushed from the beach and the surrounding area by the RNLI  Hovercraft. It was responding to a callout, but I don't know for what or or what the outcome was.

This is a Lion's Mane jellyfish in the harbour. Quite a small one, the bell diameter about the size of a large dinner plate. The stinging tentacles reach up to 3m. The official description is that they have a "powerful sting".........I've been stung - it hurts!

This is something you don't see every day. This is the pond on the path to Red Nab. The water snails were "crawling" upside down on the water surface.
I'm not sure what the white particles that they were feeding on were, but you could see them going into the snails mouth. 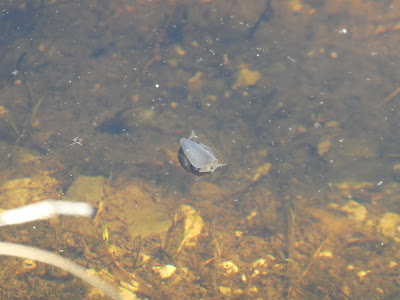 They don't just drift with the water, but activity "crawl" under the water film. Science is only now starting to understand how.