Better wind, but it could have tried harder!

Pete and Jean were first on the scene:
From Ocean Edge:
Mediterranean gulls 27 (4 juvenile).
Whimbrel 3
From North wall before Nick arrived, after that records would likely be duplicated:
Gannet 1
Manx Shearwater 1
Sandwich Tern 2
Report from Nick.

I checked from the lighthouse late afternoon (MD)

Nothing else within my range.

Remarkably, despite a few walkers, one with a dog, it was not disturbed while I was there, so I never saw it in flight.

Painted Lady 1, briefly on the Unscented Mayweed - a bit of a surprise.

There were at least 6 on the sea out from the lighthouse, even after the beach next to the jetty had become exposed. There were 12 on the beach when I left. This adult/3cy came in from the north to join other meds on the sea.

Not a great shot this one, but this young Herring gull appeared reluctant to let go of what looks to be a blue plastic cap. I hope it wasn't somehow physically attached to it! 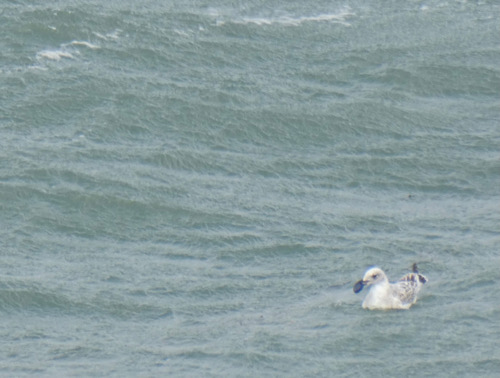