Fifty up, but it includes two byes

Almost no air movement and what there was was swirling around in the morning. A steadier light east breeze by the afternoon. Mainly overcast till evening.

Pale-bellied Brent goose 50 - there were at least 23 on Red Nab at 09:00, even though the tide was only just high enough to reach the rocks. At least 44 out from the children's play area, as I walked out to the skear at 15:15 and 48 on the inner skear just west of Sunny Slopes groyne on my return at 16:40 (I don't think they come to this area to feed, there is much less weed here than out from the play area, which was deserted at this time. I suspect that it is a better area for them to find suitable grit material, perhaps another reason why they ventured to the north of the groyne the other evening, there is lots of coarse sand there as well as the gut weed (MD)). The 50 was made up by 2 birds flying north up the bay while I was on the skear.
South shore
Shelduck 33
Wigeon c160
Knot 150
We are coming to the end of this set of neap tides. This area of mud, just out from the saltmarsh hasn't been covered for 3 days, the Blow Lugworm casts, that are normally erased each tide have grown. These casts are made by relatively immature (small) worms, even so the casts have become impressive. You can see the line where they end towards the slipway, this is as far as today's tide reached. Earthworms produce similar casts, but with no tides to wash the soil away it just builds up over time, burying anything on the surface (Charles Darwin was fascinated by this process and conducted experiments with earthworms over a 25 year period!)
Middleton Nature Reserve
Just the two main ponds checked, pretty much a full house except for no Teal
Mute Swan 9 adult plus 9 immature
Coot 1
Moorhen 8
Gadwall 41
Wigeon 2 (pair)
Shoveler 2 (pair)
Tufted Duck 4 male
Little grebe 1
Heysham skear
Eider c80
Great Crested grebe 2
Red-breasted Merganser 4 (2 pair)
The only time I saw the sun today was when it was setting.....I went all arty! (MD)

After the sun set the light quickly disappeared, revealing another indicator that we are moving from neap to spring tides.
Just out of the recording area:
Jean managed both the Sandy Lands Black Redstart and the Lamppost Mediterranean gull
Janet saw 15+ Redwing along Carr Lane towards Middleton sands. 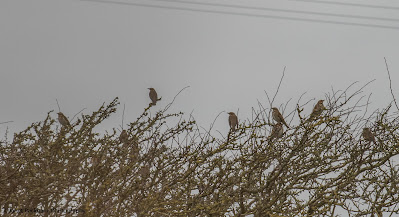