Ocean Edge incoming tide
2 x Pale Bellied Brent on salt marsh by 11:00. But were not on Red Nab earlier. Suspect it was too rough.
There was also a drake Eider with them today.
Stonechat still easily located in NE corner where all the last storm's jetsam is now decaying.
Skylark 1 behind OE foreshore bund .

I have attached a location shot, taken from slipway area. It shows were the Brent typically are, but also shows the corner where the Stonechat frequents. Directly behind them where the wooden fence ends. 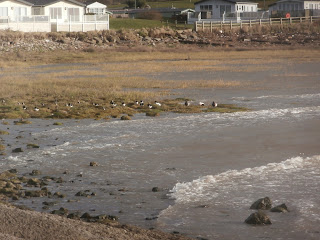