Cant find them on their usual high spring tide routine!

Iceland Gull - 3rd W harbour area on and off all day 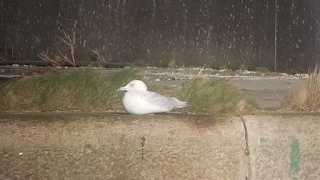 Thanks Matt for the mobile phone pic

Chough - seemingly ever-present (dangerous word or two!) in the first two fields north of half moon bay cafe
Med Gull - ad Knowlys road
Jack Snipe - two OE saltmarsh edge
Snipe - 6 OE saltmarsh edge
Stonechat - female OE saltmarsh edge
Kittiwake - didn't actually see any as there was no seawatching carried out, but it was typical Kittiwake flock weather in the morning tide and John Webb intercepted about 120 off JBP which would have come past here
Posted by Pete Marsh at 23:18 No comments: