The very light N to NNE breezes continue, mainly overcast. Although overcast, the visibility was superb today.
Heysham skeer - low water 10:00 (MD)
Long-Tailed Duck 2 female/immature - yesterday, Pete managed a brief view of 2 - 3 small ducks feeding a long way out across the bay, they could have only have been this species. Later Foulney reported 3. So this morning I was looking out for them, and dropped lucky!
I was on the skeer and saw two small ducks flying around near the green marker post. Too distant to check details with my x10 binoculars so immediately used my camera set at x30 to video them. Just as well, they didn't come any closer.
I lost focus twice in the clip so split it into two sections
At the end of this second clip they were heading west, I lose focus here and cannot relocate them with my binoculars, presumably they continued west out into the bay. They were flying very quickly!
These are some stills, zoomed in from the videos. 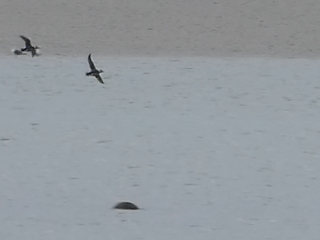 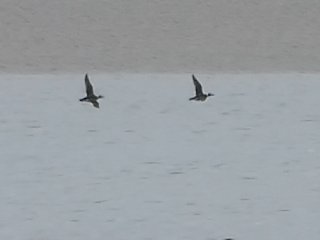 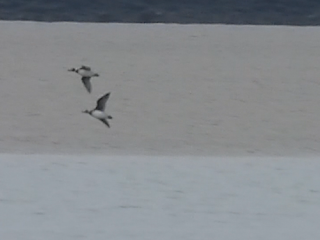 Red-breasted Merganser 9
Great Crested grebe 8
Eider not counted, but looked similar to yesterday
Pale-bellied Brent goose 12 - I was pleased with these, yesterday I posted a picture showing that some of the isolated pools amongst the honeycomb worm beds still held reasonable amounts of sea lettuce.
Middleton Nature Reserve (JP)

Finally, Kevin took advantage of today's remarkable visibility to take these images from the lighthouse area on the south wall:

The visibility today was exceptional and, by tweaking the contrast, I was able to show the mountains of Snowdonia (the highest one being Carnedd Llewellyn, I think) quite clearly. 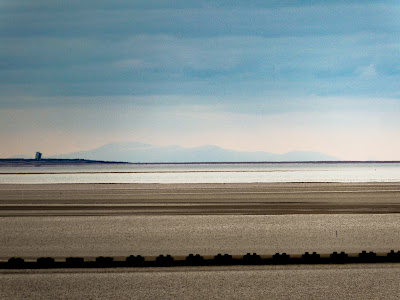 Also some shots across the bay:

All the above photographed with Kevin's small lens camera!
Posted by Pete Marsh at 20:16 No comments: