There was no sign of any Brent geese on the north shore as tide was coming in. This was the favoured side last winter.
However, there were already at least three pale-bellied Brent geese on Red Nab just as the tide reached the rocks (11:20). Three were seen flying off at 12:40 and these, or three other, were on Ocean Edge salt marsh at 12:50. These three were on exactly the same patch as yesterday.
Tomorrows tide is lower, but should still be high enough, particularly as it has not yet been established at what time in the tide, and from which direction, they arrive at Red Nab. 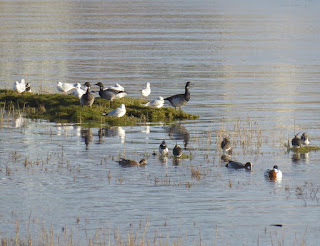 High water on the salt marsh, particularly these mid height tides, is a busy place.

A grey seal managed to catch a fish between outflows. It looked like a bass, a few over winter around the outflows. By the time it managed to eat it, several gulls were grabbing whatever scraps were available. While the seal tried its best to grab them. 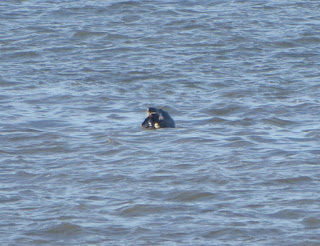 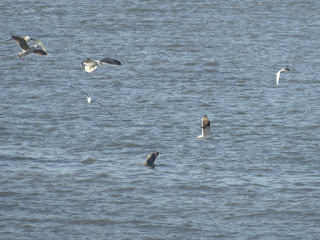