Needed to be earlier and everywhere at once

Heysham Obs
Trawling other blogs a minute or two ago, apart from a "should have done better" personal rap over the knuckles for the inadequate early morning landbird coverage (see e.g. Hilbre and Rossall for how it should have been done), Jean and Pete, who conscientiously covered the seabird side of things,  recorded an unprecedented 5+3+1 of Little Egret.  It seems that the initial flock of 5 was tracked all the way from Ainsdale via Starr Gate via Rossall and the movement was obviously 'purposeful'.   It does not appear that the subsequent 3+1 (in themselves an 'unprecedented' movement past Heysham in spring) were recorded at the other sites, so their immediate origin is a puzzle

The trouble with a big fall on a sunny morning is that it all happens at once and the birds soon 'melt inland'.  It is also not helpful to turn up nearly 2hrs after dawn!  The other problem is whether to stay on the sea or prowl around the various landbird sites.  The following were seen by two observers covering as much as possible and one who had to do go to work after a token half-hour! 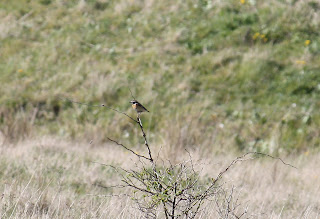 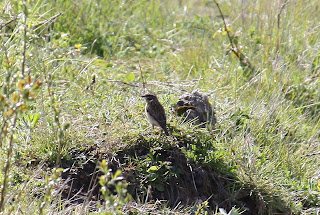 Whinchats on Middleton.  Thanks Pete


Marsh Harrier - female NE over Heysham NR at 0710hrs
Little Egret - completely unexpected and unprecedented was 5+3+1, as three separate lots, heading north across the sea towards Grange at about 0815-0825hrs
Gannet - 38 in
Razorbill - 9 in
Fulmar - 1 out
Auk spp. - 1
Sandwich Tern - 62 out
Arctic Tern - 4+15+11 in
Black Tern - 4 in
Turnstone - 79
Red-throated Diver - 1
Meadow Pipit - 15 NE
Tree Pipit - 3 NE
Swallow - 33 NE 0715-0830, increasing to 38 NE 1000-1015 (along coast)
Goldfinch - 60 NE in very intermittent vis coverage
House Martin - 5 NE
Grey Wagtail - late migrant NE, another Middleton
Whinchat - one north harbour wall and two Middleton NR
Garden Warbler - one singing by the obs tower pond 0700-0710
Grasshopper Warbler - one singing by Heysham NR classroom 0700-0705hrs (no extras at Middleton)
Willow Warbler - impossible to estimate as large numbers were present when arrived at the reserve at 0650 but these appeared to be the last of what was a significant fall e.g. two nets were quickly erected and 10 caught straight away but no further sign as the wind got up.  Needed to be here earlier and setting nets below the obs tower.  At least 50 around the office area at 0650hrs, all 'silent' females, contrasting with a migrant singing male on the north harbour wall mound!
Wheatear - at least 25, probably many more as OE not checked until after 'dog time'
Sedge Warbler - 6 singing males Middleton
Whitethroat - singing males Smithy Wood and 4 at Middleton
Lesser Whitethroat - singing male Middleton and the usual one by the office
Blackcap - unringed lightweight male caught by office
Posted by Pete Marsh at 07:48 No comments: