A reasonable selection, under the circumstances

Another relatively mild night, some heavy showers in the morning eased off by the afternoon. The winds still quite light and more to WSW.
The "circumstances" referred to in the title, isn't just the travel restrictions from lockdown, but also the intermediate tide height and equally intermediate weather.
North shore - low water 09:00
Difficult viewing through the rain but still:
Eider c50
Goldeneye 1 male
Pale-bellied Brent goose 7 feeding in the SE skeer corner
Janet took these shots of, another woefully under recorded bird, a Carrion Crow "making a racket" at Half Moon bay 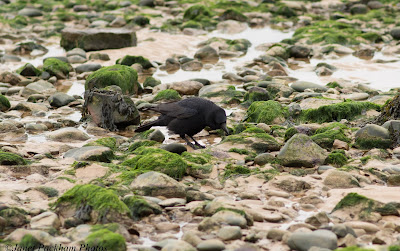 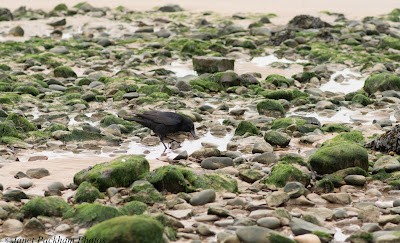 Unlike the uniform black plumage normally perceived, if you open these images you can see some nice plumage details
Saltmarsh area high water 14:40 height 8.8m (MD)
At this height, the tide just reaches the saltmarsh and partially fills the gullies, so I wasn't expecting to see many if any snipe, so these were as bonus.
Common Snipe 4
Jack Snipe 2
Both the Jacks relocated on the marsh, whereas the Common headed towards Middleton Nature Reserve.
Rock Pipit 1 on the saltmarsh
Turnstone 25
Grey Plover 2
Ringed Plover 16
Knot 1
I almost tripped over this bird, it paid me absolutely no heed. It had a pinkish area on its lower chest, possibly a stain, possibly faded blood. 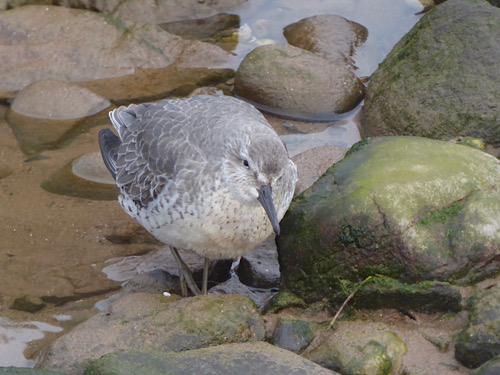 This clip shows it apparently trying to feed, but it looked to me to be an involuntary feeding action, there didn't seem to be anything worth feeding on.
But, other than that it seemed to be in good condition, one possibility is that it had recently been hit by a raptor, almost certainly a Peregrine. Hopefully, it was just stunned and would soon recover. I left it feeding on nothing, and there was no sign of it when I returned 20 minutes later.
Posted by Pete Marsh at 20:12 No comments: