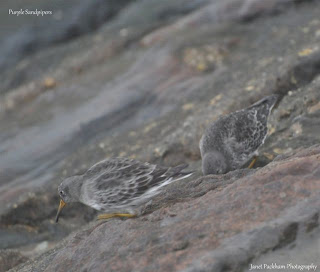 The two Purple Sandpipers taken in foul weather conditions this afternoon on the north harbour wall.  Thanks for this, Janet
Heysham Obs
A possible ringing window as I left home in calm frosty conditions became a shower-laden F3 wind on arrival at Heysham, no good for a Twite session or the anticipated feeder ringing session where new Goldfinches and Greenfinches have been trickling in (observation of unringed birds).  Shame as there were plenty of birds around the office feeder and the Twite situation was more interesting than it seems to have been of late.....and there are not many calm possibilities on the horizon!

North harbour wall 0900-0930
The plan B (or C) was actually quite productive:
Kittiwake - flock of 5 1CY headed distantly into the bay
Red-throated Diver - one on the sea, one flying out
Med Gull - adult on beach
Purple Sandpiper - two flushed from below the north wall by the gate by tackle scavenger and headed towards the harbour mouth.  Later present on the north harbour wall (see pic)
Robin - unringed bird on feeder
Meadow Pipit - 2 (unringed) in sandworks
Twite - flock of 17 with 2 unringed birds were joined by another flock of 9 where 7 were unringed and one sported 2011 Machrihanish-ringed sequence.  Then everything was spooked and the Twite flew to the south towards the mast in two separate flocks
Goldfinch - 2 unringed birds
Posted by Pete Marsh at 09:55 No comments: