Ringing and vis report from Alan:

Ringing this morning produced a steady trickle of captures, with 24 birds caught in total.

8 Grey Wagtails trapped and colour ringed but 7 more seen but not caught. Remaining captures consisted of :

Three Swallows passing through at 07.00 and another two at 10.15 were the only passage birds noted. A Kestrel was hunting over the eastern side of the reserve.

South shore mid morning before high water
Wheatear 5 (2 on foreshore 3 on Red Nab)
Rock Pipit 1 between Red Nab and the foreshore
Mediterranean gulls adult 7 juvenile 4.
The immature Mute Swan was feeding on the weed from the freshwater culvert again, this is a nice shot of it with two adult and three juvenile Mediterranean gulls on the island behind it.
Kevin checked after I had left, by that time a Sandwich Tern had arrived.
Kevin also managed this shot of one of two Willow Warblers feeding/drinking on the newt pond in the nature park behind Red Nab
Janet had a look on Heysham Nature Reserve
Heysham skear - low water 18:30
Great Crested Grebe 3
Eider 4
Little Egret 3
There were plenty of waders, including Oystercatcher, Curlew, Redshank, Turnstone and Ringed Plover. But, this is where the north south divide comes in. Grey Plover and Bar-Tailed Godwit are always scarce on the north side, but Knot have historically been common on both sides. There were none today despite thousands seen on the south side yesterday.
This is something I've not seen before (MD). This young Herring Gull has a small Common Starfish. The gulls often don't even bother with starfish, and when they do the technique is to put them on their back and  then peck their guts out. Even large starfish "eaten" this way look intact, with only a small hole where their guts were. I had always presumed, and still do, that the legs are effectively indigestible. But this gull swallows it whole. I expect the end result will be the same, with the guts being digested and the legs regurgitated.
The other day I mentioned that the Grey Mullet on incoming tides, on the south shore often clamour to reach the algae that forms on the mud between tides on sunny days. I have had couple of comments of surprise, not disbelief, that significant algae mats can grow so quickly. This evening on the north side, the mud was turning green with algae as I watched. Not sure what other factors other than sunshine prompt this, but obviously algae spores and nutrients are required.
These couple of shots are mud at the edge of the skear just after low water. They can only have been exposed for a couple of hours at most. The mud below the sea wall on the south side where the Mullet feed can be exposed for six hours. There are Grey Mullet on the north side too, but I suspect that this particular bloom is destined to become shrimp meat. 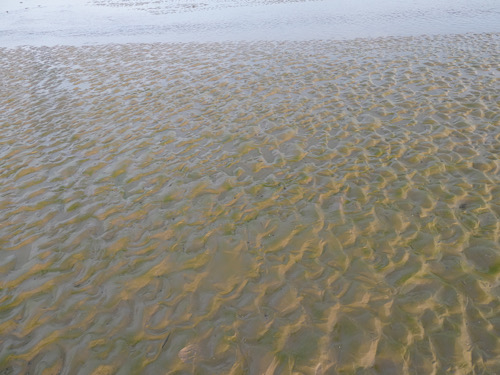