South shore
First check 4 hours before high water
Wheatear 1 female/immature on Ocean Edge foreshore (not the same as yesterday's bird)
Rock Pipits 3 on Red Nab
Mediterranean gulls 17 ( 14 adult plus 3 x 3rd calendar year). These were feeding on the beach between the wooden jetty and No.1 outflow.
It was only 08:45 and still cool, a check of the scrub area located only one butterfly, a Peacock.
Willow Warbler 1 - there was one here yesterday too.
Second check 3 hours after high water
This was both to see if the Meds returned to the beach but mainly to see if the insects were coming in off the sea again.
At 14:45 the breeze was more to the NE, but this is fine to bring any migrating insects ashore. But very little was coming in off. Just a single Small White and a Small Tortoiseshell seen coming in.
A walk along the scrub located just 6 Small White and 2 Small Tortoiseshell, and most of those were at the waterfall end, i.e. about to move on. It looks like what little movement that there had been was just ending. It's normally better when the tide is further out than it was at this time, but better conditions are only advantageous if there are insects to come in.
There were similar numbers to yesterday of Common Blue and Meadow Brown, but no Gatekeeper.
While I was in the area a further 5 Small Tortoiseshell came in off, but no more Small White.
Whimbrel 2
Mediterranean gull only 1 unringed 3rd calendar year turned up as the ebbing tide exposed the beach. The technique they use to feed at this stage of the tide, is paddling. They catch the sand mason worms that are still feeding in the shallow water. It's a wonder that there weren't more Meds as this one seemed to be catching plenty. It takes three worms in this short clip.
I'm sure more Meds would have arrived later, but they would have been beyond my ring reading range, so I didn't stay.
This was a bit unusual, this Redshank had caught a relatively large crab, and didn't have the sense to fly off with its catch. It was chased all over the beach with it, this is just the first 30 seconds.
It was chased by Redshank and Oystercatcher alike, but managed to keep hold of its prize. It took a full two minutes to reduce the crab to a size that it could swallow. It forced it down, then continued feeding as if it hadn't eaten for ages! (MD)
If you are arachnophobe, perhaps you had better read no further.
Janet spied this large spider the other day, hunting for the insects below the curve of the Power Station sea defences. I have been advised that this is a Giant House Spider (not a wolf spider as I originally suggested, in this case Giant is part of the name not just an adjective for a normal House spider (MD)) 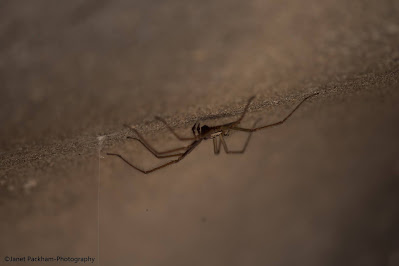 But this is just a tiddler compared to what lurks in Heysham Nature Reserve! Report and pictures by Kevin:

I've recently noticed some large sheets webs in the long grass and gorse at the northern end of the plateau in Heysham nature reserve.  Tickling with a grass stem produced a surprisingly large spider which made me jump! It seems it's the Labyrinth spider. It's a Southern species and we're really at the Northern edge of its range. A bit of digging reveals that it seems to be a bit of a Heysham speciality

This shot shows their very substantial webs. Apparently, their favourite food is grasshoppers, so the webs need to be strong.