Just a few bits and pieces

Overcast and cool for late June, but the rain largely held off.

No records so far from anyone checking the south shore gulls

Middleton Nature Reserve - late am (MD)
The wildfowl pretty much the same, Still 5 + 3 Cygnets with parents and 10 Mallard (large) chicks with mum. Still no sign of any Gadwall.
Little grebe 2 adult plus two young on "no swimming" pond.
Coot and Moorhen with chicks

Warblers:
The following heard - Grasshopper (1 reeling on western marsh - first time heard for some while), Sedge, Willow, Chiffchaff, Lesser and Common Whitethroat.
Not heard - Reed, Blackcap and Cetti's (bizarrely first time I've not heard one since they started singing in early spring) 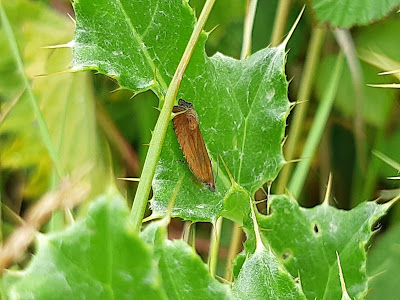 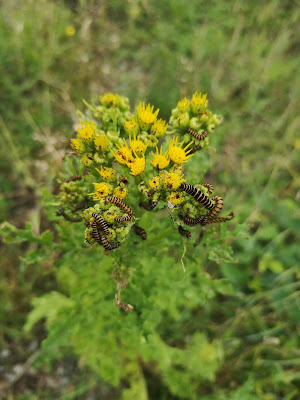 These Cinnabar caterpillars on ragwort near heliport - ref Janet

A check of the beach were the doe deer tracks were on Saturday, revealed a pristine beach. No tracks of any sort, including human and canine.
Posted by Pete Marsh at 20:43 No comments: