Heysham Obs
Whilst clearing out the 'moth toilet' at Heysham NR last night, a large well-marked pug was located on the wall - there are a lot of lurking places which can be missed during the routine morning check.  It did not look right for a variation of Wormwood Pug and far closer to Pimpinel Pug which does occur very sparingly in south Cumbria.  There is also some Burnet Saxifrage here...  Examination revealed it to be a female 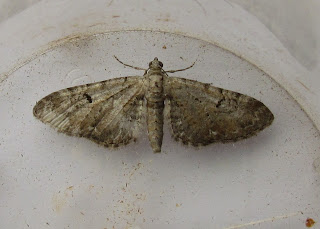 Size = 23mm ruling out a lot of other pugs! Thanks John

Birds
Whilst trying to pot an Agonopterix in the actinic on the north harbour wall as part of the intensive SD36 moth survey, at least one, probably at least two Crossbills flew over, heading ESE - the Agonopterix escaped and was probably a new 10k square record!

There is a whale and dolphin search on the north harbour wall this afternoon starting at 1330.  Noting the parking 'arrangements', please park alongside the wide bit of road and leave plenty of room for anglers who should be in situ by then anyway. Best of luck with the mammals - a Grey Seal is a possibility.
Posted by Pete Marsh at 12:45 No comments: