An odd day plus a predictable afternoon Osprey

Every so often a migration day throws up the unexpected epitomised by six |House Martin (its only 8th April in a 'late' year) and up to 100 Swallow sitting around in bushes at Middleton! 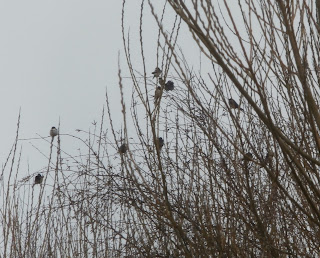 all six house martin are on here - thanks Malcolm

Lets go back to the other day when a mass of Meadow Pipits were grounded on Heysham head and the horse paddocks but very few were moving south over the reserve of sites to the south.  I wonder if this explains 500+Meadow Pipit over the Stone Jetty this am?

Going back to the hirundines, this was unprecedented in spring and Malcolm suggested that these were a product of overnight roosting, some in the reed mace as they had "fluff" stuck to their feathers equating to the friable reed mace seed.  They were reluctant to head north in the murky weather but gradually moved on in dribs and drabs with others arriving from the south similarly

OSPREY - south over Middleton 1530hrs (thanks Mario)
Posted by Pete Marsh at 23:53 No comments: