Heysham Obs
On my own initially this morning and the alarm clock failed!  Therefore missed a good hour of clear dawn weather with little wind.  Past experience of clear conditions suggests that this can be too late for Willow Warblers around the core trapping area.  Therefore arrival at 0620 revealed nothing and the two nets set just after the breeze started to make itself felt also failed to produce any night migrants, just  couple of Lesser Redpoll before the wind became too strong.  Observations then ceased.  However, other observers covering Middleton recorded a large number of singing male Willow Warblers - at 20-25, far in excess of the low single-figures breeding population.  So were these dawn birds or did the strengthening north-easterly drop these birds after coverage 'ceased' around the office area?  See what Walney posts later on?

Purple Sandpiper on the rocks below the north wall at midday

No Grasshopper Warblers singing on Middleton 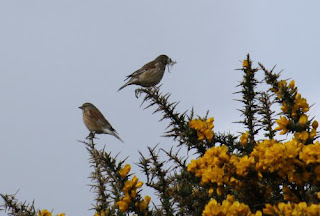 Thanks for this, Pete