Black and white things emerge from the mist

Very poor visibility today, but the wall to wall overnight rain had failed to drop any night migrants eg Wheatear during the morning at least.  A search of the grassy areas for the potentially 'grounded' Chough also failed to produce.  However, Red Nab and the outfalls provided some publishable material, notably a pink-flushed ad summer Little Gull: 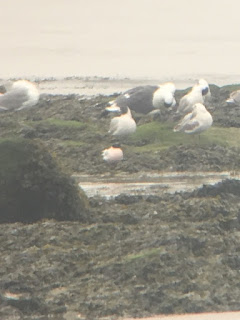