First in the queue at the breadline!

A harder frost last night froze all open water, except the few pockets maintained by the wildfowl. Although it was another reasonably pleasant day as long as you were protected from the cold ENE wind. A few short snow showers mainly in the afternoon. A very heavy frost expected tonight.

Middleton Nature Reserve
A check first thing saw 140, mainly Black-Headed, gulls on the ice of the main pond. None were ringed, a bit frustrating as a blue ringed BHG was seen briefly yesterday, out of only 6 on a small pocket of ice.
Janet took this shot a bit later

Less gulls now, but you can see the small hole being kept open, mainly by the swans.
Janet also took these two shots. 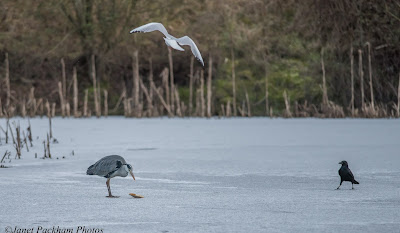 A BHG dropped this bread, and the resident Grey Heron flew over to investigate 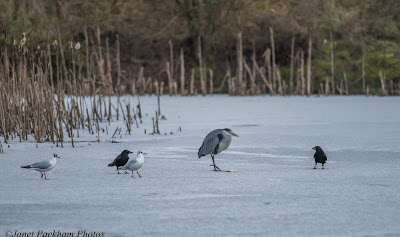 It wasn't overly impressed, a nice frog would have been better, but wasn't for handling it over!
Mallard 9
Teal 8 - stood on ice
Gadwall 4
Coot 6 (more on these later)
Little grebe 3 (2 + 1) I have suspected 3 birds for a couple of days (MD)
The Little grebe seemed to "know" that they needed to feed as much as possible (while they still can).
Cetti's warbler 1 singing in central marsh
Red Nab and Saltmarsh - high water 09:25
Rock Pipit - 2 on Red Nab, one displaying. 1 near rocky outcrop on east side of saltmarsh.
I thought there may have been some cold weather passerine movement to the saltmarsh, but the only additional birds were a Song Thrush and a Blackbird
The 8.4m tide just reached the edge of the marsh, but still lifted 29 Common Snipe
But this one is not quite so easy to see
Jackdaw 10 by Trumacar Stores - a new area for local birds
Mediterranean gull 2 - one behind lunchtime ferry plus one seen out from Knowlys Road
Brent geese none seen/reported in the area today
The Oystercatchers were also not on the cricket or football field
Finally two clips of Coot. This first one is of one feeding yesterday, showing just how graceful they can be.
A grace not transmitted to walking on ice:
Walk this way........
......err......perhaps not!
Posted by Pete Marsh at 20:14 No comments: