Busy morning but no surprises 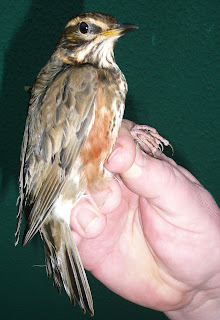 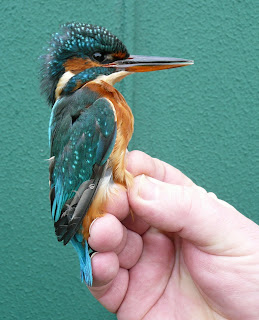 Thanks for these, Dan

Heysham Obs
Twite
A major ringing session on the north harbour wall today. Thanks very much to the harbour authorities for allowing this to take place before the weather breaks, despite the dredger rescue operation nearby. One bird had been ringed at Walberswick, Suffolk in December 2006 and two had been ringed on the Duddon estuary at Askam, either last Thursday or during the previous week. The Plain English Society have complained about the next bit so here is the re-write: 44 have been ringed during the past week (since 31/10). The maximum observed flock size has been 89. Therefore, because there were only 11 retraps in the catch of 66 birds this morning (52 unringed and three 'controls), this indicates quite a turnover of birds, as you might expect during the peak autumn migration period for this species. This proportion of about 20% ringed was also the same as observed yesterday, therefore is not due to a net-shyness bias towards unringed birds. Indeed, the impression was that all birds present were in fact caught this morning!

Grounded
Blackbird - c120
Redwing - 67
Song Thrush - 17
Blackcap - one ringed - they have been really scarce this late autumn & possibly a different bird seen in the field
Goldcrest - more than yesterday - c28
Reed Bunting - 4 in the reedbed
Robin - no perceptible increase - one new bird ringed
Treecreeper - 2
Meadow Pipit - 18 on OE foreshore, including a metal-ringed bird with a split-second view of consecutive or near-consecutive letters "ek" in the address - then it flew off
Pied Wagtail - 11 OE
Long-tailed Tit - getting on for 100 (including the flock of 22 - see 'vis')Brambling - female nature park with Chaffinch
Chaffinch - c20
Siskin - 2
Grey Wagtail - 2
Kingfisher - one ringed - caught by the dipping pond