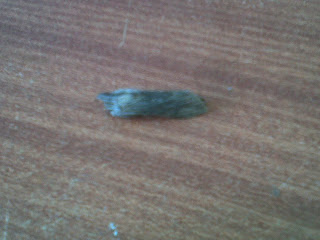 An iconic blackberrying of a Chamomile Shark

Heysham Obs
The best has probably already been squeezed out of today's brisk north-westerly with the following, althought there is previous history of Kittiwake flocks moving with the tide, even in the afternoon, in these conditions:

Osprey
The first birding 'miss' due to temporarily being without a mobile as I could have intercepted this.  Flying towards Heysham from Rossall at 1100hrs.  Thanks for trying Ian.

Moths
Included the first Chamomile Shark for yonks
Posted by Pete Marsh at 09:01 No comments: