Very light breezes starting SW ending WNW, often breathless in between. Overcast for most of the day but the sun came out at 15:30 and made it a very nice evening.

South shore
Wigeon 232 floating around Red Nab towards high water, before starting to fly off towards the estuary.
Rock Pipit 6
Stonechat at least 4. A male on the saltmarsh, another male on Red Nab, seen by several observers at different times and could easily have been more than one bird. Male and female together near the pond just north of Red Nab. 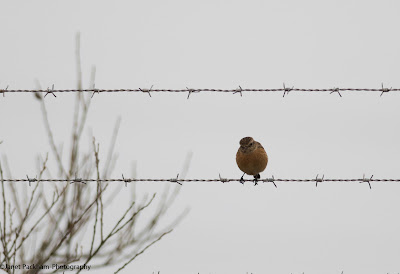 Janet has been doing some good work with the regular "seal", she was confident that her last two sightings were of different seals. Walney Nature Reserve have confirmed that her images do indeed represent two individuals. Today's seal is different again. So three individuals in three sightings - Janet is on the case now, watch this space!
This is today's Grey seal, it has just caught a bass, unfortunately quite a long way out. The sea is getting warmer and the bass are not as dependent on the outflows as they were. 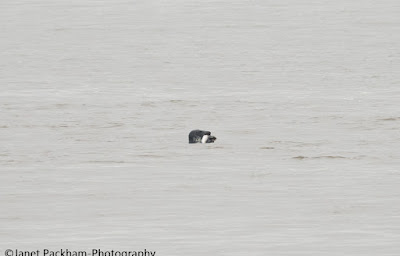 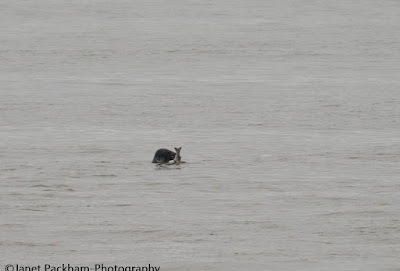 It was absolutely beautiful out on the skeer this evening. I left my coat and pullover near conger and completed my walk in a T shirt! (Although by the time I got back to my coat at 17:00 it was getting cooler quickly).

The sea was like a mirror, if the Goldeneye had been feeding I would have seen it.

We've had some great images recently, thanks to all contributors (and please, if you are in the area, any records and photographs are always welcome). But this is my favourite so far this year!
The above relates to the observation that we never see sea birds rest on this structure (see post 31/12/20). Obviously one factor must be the wind, it was almost breathless today, but I've seen it deserted on many a previous wind free day. And gulls regularly use the rails on the wooden jetty in quite fresh winds. We'll see if this is a one off or if this bird is going to break the mould.
Posted by Pete Marsh at 20:22 No comments: