Terns turn up on time

A pretty dreary day, rain on and off till evening. Westerly wind.
The only records so far are from the south wall in the evening.
Kevin watched the tide cover the beach near wooden jetty. There were four Mediterranean gulls taking advantage of the sand mason worms. 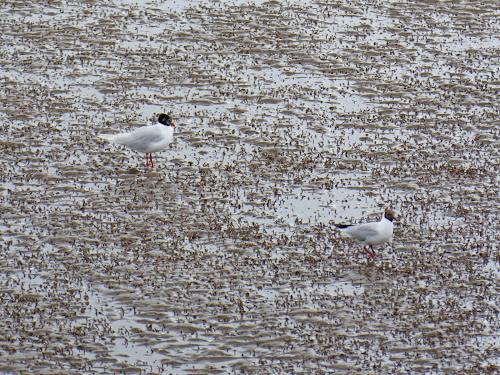 This adult Med and a BHG were the last to leave. You can see the sand mason worm tubes protruding out of the mud.
At that time there were no terns on the outflows.
I (MD) arrived at the outflows at 17:15, still no terns.
Checked the Mediterranean gulls on beach and Red Nab.
Adult   4
3cy       3
ad/3cy  1
2cy        2
I got back to No.1 outflow at 17:45, still no terns. The water level was about 0.5m below the outflow edge. At 17:50 Common Terns started feeding, I didn’t see from which direction, but not from north or west.
There were quickly at least 5. They looked to be the same birds as yesterday, based on plumage variation distribution. They obviously have a favoured water height in the outflow. I left at 18:00 there were still at least 3 feeding. 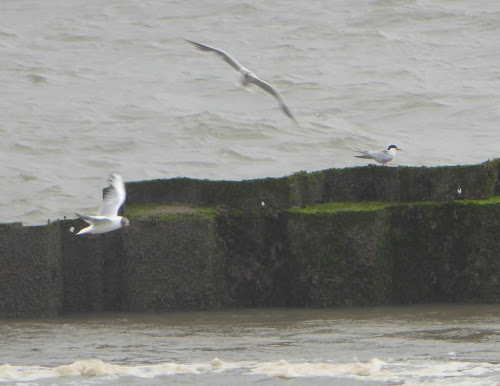 One had time for a rest and preen.
Hopefully more later
Posted by Pete Marsh at 20:41 No comments: