The autumn keeps giving scarcities but we need the big one!

Inshore/seawatch coverage
Eider - just two males and a very distant flock of 7 - the mussels have been washed off the main skeer after rising themselves up during a series of silt deposits, then washed away by a flood tide/freshwater flood
Snow Bunting - what seemed to be a male flew SSE low over the sea at right angles to the strong NE wind and seemed to be heading inshore around the Lune Estuary area, possibly Potts corner area on the same line.  Surprisingly obvious against the sea!
Geese, presumed Brent - untidy gaggle of ten-ish flew low and landed near Rampside in crystal clear visibility!
Med Gull - still one 1CY around
(No sign of the Shag gang or Little Gull)

Great White Egret(s)
One north past wooden jetty 11:00.
More interestingly, one, once again, over Middleton Nature Reserve late afternoon 15:45. This is 15 minutes later than yesterday, but suggests a routine. Today's bird came more from the north than yesterday's, but still ended up flying SE over main pond. Worth checking around this time tomorrow, and hopefully onwards (MD) 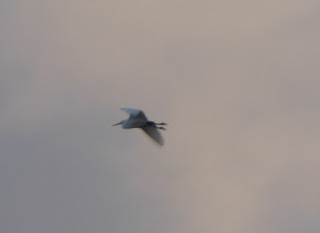