More easterlies and migration...and a bit of cloud

The key things today were cloud cover with drizzle just inland of us and this dropped a few more Yellow-browed Warblers with two in the recording area and one just outside to the south and a really big gang of alba Wagtails (at least two very obvious adult White) on Ocean Edge foreshore............but the juv Sabine's Gull was nowhere to be seen after a good innings

More grounded migrants
Yellow-browed Warbler - one seen and heard by the pond along the footpath to Red Nab (Brian Tollitt) and one caught and ringed at Middleton NR (thanks to Joanne for the pic who was then inspired to go and find her own just to the south of the recording area (see pic LDBWS sightings thread))! 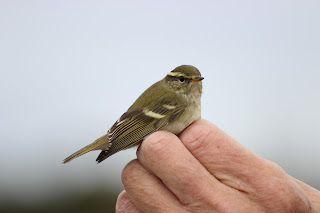