Another almost breathless day with the gentle breeze making its way around the compass. The air was much warmer today so very warm in the sunshine. 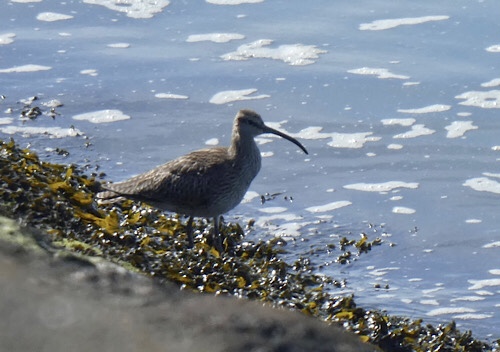 Heysham skear - low water 15:30
I went down a bit earlier in the tide cycle today, the water was still ebbing.
Dark-bellied Brent goose 1 - it was already feeding in the same location as yesterday. So presumably it had been there a while, and I fully expected to stay till moved on by rising tide. So possibly another show tomorrow? If so 90 minutes either side of low water (15:30 - 18:30 tomorrow). If you want to see detail of the bird, see yesterday's post. Today's pictures are to help show where it was.
Close in on the north side of the skear,  so no chance of seeing it from the south side. Best place from the sea wall would be the fishing platform near to where the Grosvenor hotel used to be (Grosvenor Rd)
Eider c50
Great Crested grebe 1
Red-breasted Merganser 6
Whimbrel 5
Dunlin c20 - I really enjoyed this, I was just walking off the inner skear, when I had to stop to allow a small troupe of Dunlin walk past. An interesting variation of plumages from winter towards summer.
Just occasionally, to me special occasions (MD), the beach sings. Not really a song, more like the white noise when you play a record and the music has stopped. It tends to happen on warm calm days, I think of it as the sound of life, millions of invisible bubbles popping, presumably oxygen from the algae and carbon dioxide from the tiny creatures. Today was such a day, the sound although not loud completely surrounds you. I wasn't sure If I could record it, and at one level I couldn't, this recording although conveying the sound, falls way short of conveying the sensation. Turn up the volume and try and imagine the sensation (there is nothing to see in this clip, it's just for the noise).
Posted by Pete Marsh at 21:09 No comments: