South Shore - high water 09:45
Rock Pipits 3 - between Red Nab and the start of the foreshore
Linnet 2
Goldfinch 16
Both the above on the saltmarsh
Swallow 5 (2 + 3) south
Wheatear - just the stretch from Red Nab to the rocky outcrop on the east side of the saltmarsh checked. The absolute minimum was 37.
They continued along the shore, Janet was just beyond the southern limit of the recording area and was seeing them there too.
There were almost certainly many more on the north side, Howard took these pictures of two birds on the Near Naze yesterday 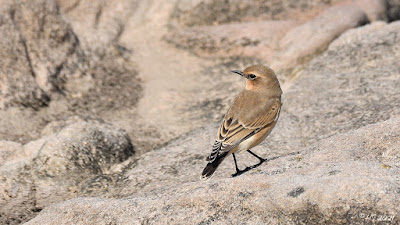 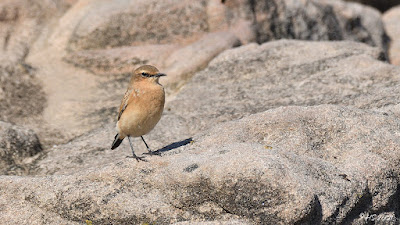 Mediterranean gull 3 roosting with a small group of mixed gulls on the beach just out from the saltmarsh. One was the long staying green ringed German bird.
I went down to check the waders on the water line towards high water, but on these very low neap tides (7.3m high water today), the waterline is still a long way out, even at high water. Before I was close enough to check the wader numbers in detail they were spooked by, presumably, at least one raptor. This is them leaving before I got close, their erratic flight patterns suggesting that they were still under attack. I suspect that the two birds flying upwards towards the end of the clip could be raptors. (MD)
What I managed to count before they were spooked, plus those that remained:
Knot 400+
Grey Plover 50+
Bar-Tailed Godwit 43
Dunlin c140
Curlew c100
Oystercatcher c50
Greenshank 1
Heysham skear low water 16:20
Only half of the middle skear was exposed, and not a lot of birds.
Great Crested Grebe 1
Eider 3
Little Egret 2
Grey Heron 1
Bar-Tailed Godwit 1
Oystercatcher c500
Curlew c40
Turnstone c30
Ringed Plover 25
This feeding group was a bit of a puzzle, the tide had almost stopped ebbing. Both large and small gulls plus waders appeared to be finding plenty to eat in this shallow drain. It can only have been shrimps, but the feeding technique seemed too slow for the decent size of shrimps currently available. I can only think that another population of tiny shrimps have emerged (MD)
Posted by Pete Marsh at 20:53 No comments: