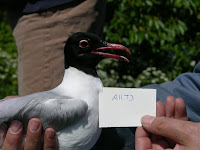 Todays German-ringed Med being ringed on the Elbe estuary!
Heysham Obs
This just goes to show that quick scans with a scope from the Ocean Edge end are not enough. A lot of the Meds were on the mudflats between the wooden jetty and Stage one outfall and these are not visible from quick from-the-car-scanning on the north harbour wall or Ocean Edge. Thanks to Mark Prestwood for sorting out last week's green darvic individual (see below) and also confirming the continued presence of the Czech-ringed adult

Elsewhere
Nothing yet on pager
Posted by Pete Marsh at 10:46 No comments: