Dreary weather and neap tides equals, not much

Southerly winds with the morning rain, swinging round to west and freshening. The rain eased off mid afternoon.
No ringing possible this morning, but yesterdays session on Middleton included:
Cetti's Warbler 1 - this with the Yellow-Browed Warbler were the only warblers seen yesterday. Not a bad double!
Goldcrest 5
Lesser Redpoll 9
Treecreeper 1
All I have so far is from my check of Heysham skeer at low water 15:00. I say Heysham skeer, but on these low tides only the inner skeer is exposed.
Little Egret 5
Knot c1500
Turnstone 20+
Dunlin 15
Plus the ubiquitous Oystercatchers and just a few Curlew and Redshank
As there is little to report, I thought I'd share a bit of local natural history (MD).
The skeer was formed at the end of the last ice age, from material deposited from the melting glaciers. Now it just consists of rocks of various sizes sat directly upon the bed rock. But originally it would have been mainly clay, similar to the boulder clay that forms the low cliffs at Half Moon Bay. The deposits formed vegetated islands, including oak trees. The islands remained till late medieval times, possibly destroyed by the great storm of 1703.
The middle and outer skeer are now mercilessly scoured by the spring tides and storms, but the inner skeer is better preserved, and some of the ancient tree roots still survive. This picture shows the area that I am going to discuss. It is around the medium sized pools lacing across the middle of the picture. These pools are c500 metres out from the slipway and perfectly safe to walk out to. 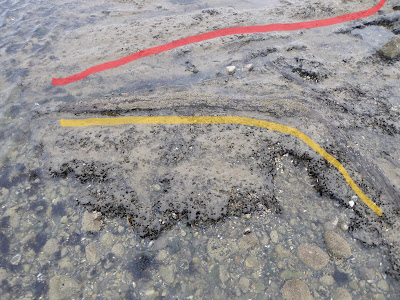 The material above the red line is silt. The area between the red and yellow lines are roots, the longest about 2 metres. The area below the yellow line is a fibrous strata, that appears to be compacted organic material. Areas like this are normally covered in silt, but this patch should now remain uncovered for a while at least.
Both the roots and the fibrous strata are riddled with holes up to 2.5cm diameter. 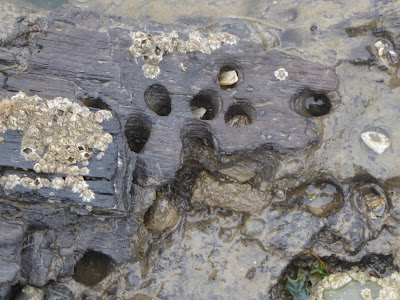 These holes are formed by piddocks. These are a bivalve mollusc, the larvae enter cracks in the wood. The shell is effectively a biological drill bit. It constantly rotates, albeit very slowly, and creates a hole that it lives in permanently, safe from predators. Unfortunately, not safe from being silted over, this picture shows two empty piddock shells, victims of the last silting over. 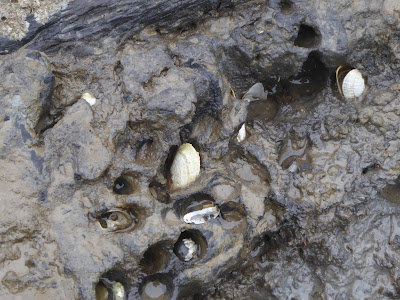 And this is one of those shells, showing the cutting edges. Piddock can bore into rock! 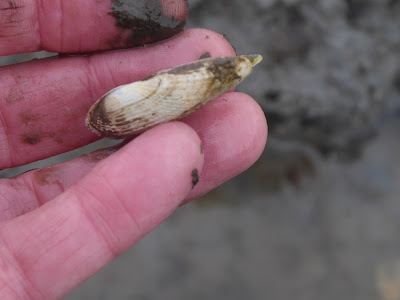 All the above images were taken today. I spotted this area as I was passing, I'm sure I could have found more with a thorough search. The roots must be at least 400 years old, but won't last forever. Each exposure results in more erosion, decay and piddock attack.
Posted by Pete Marsh at 21:14 1 comment: