White Stork (probably) - plus stuff to look out for

White Stork - an almost certain white stork, presumably the bird seen recently near Cockerham, flew high to the east over Middleton NR at 1600hrs. Seen by Janet, the slight uncertainty comes from the difficulty of observation from her car. But the description would require an even more exotic species if it was not a stork.

Comments on the forthcoming three days from Pete (M)
This next three days are forecasted to be some of the best overshooting weather there has been at Heysham right at the time eastern warblers with loud scratchy songs, Subalpine warblers (as per Dan's two years ago), red backed strikes and flyovers such as today's 1130-40ish Honey Buzzard which almost certainly went over our air space (seen heading NNE not N at Rossall).  Also record numbers of Nightjar in Lancs since the local population collapsed in the 60s - Heysham Moss at dusk?

While we are talking of Heysham Moss, there is a breeding colony of Large Heath there. Janet took this picture of the first record this year. 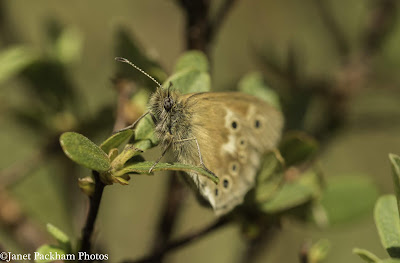 Heysham Moss is just to the east of the recording area, and is an isolated example of the correct habitat which surely extended into the recording area if old maps are to be believed plus the peaty soil in the NNE corner of HNR
Heysham Head cliffs - additional report on yesterday's activity from John (D)
The Rock pipits at Heysham Head yesterday were feeding a fledgling. There was a lot of activity with two and maybe three adults flying up and down the shore and some parachuting but as far as we could see only one juvenile. Will keep a lookout for a second brood. 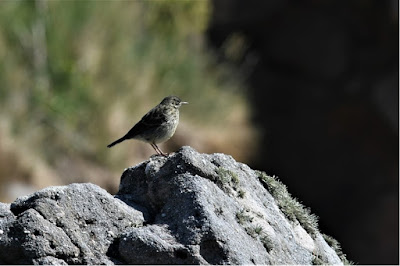 By mid morning, there was a touch of east in the wind and the tide was out. These circumstances usually leasd to a passage of insects in off the sea. At 10:30 there were just two Small White, actually flying out, but by 11:00 the breeze was more to east To the wind and there were more insects all flying east. Small White 2, Common Blue 5, Peacock 2, Cinnabar 1.
A second visit after lunch was disappointing, the wind had shifted more to south. No new insects were arriving, but a few were still drifting east, taking advantage of the few bramble flowers on the way. Small White 3, common Blue 2, Small Tortoiseshell 1, Peacock 1, Cinnabar 1.