Plump Wheatears and a Stonechat

Strong NW wind and only a few short gaps in the rain.
Red Nab to Saltmarsh towards high water.
Mediterranean Gulls only 2 adult picked out from the Black-Headed gulls on Red Nab, there were, almost certainly, more.
Wigeon 20+ on Red Nab
Rock Pipit 2
Swallow 2 flew low to the wast along the foreshore.
Wheatears 3

Stonechat 1 male by saltmarsh, unfortunately moved on before I could unpack my camera.
Linnet 15 on saltmarsh
Lapwing c60
Little Egret 12
Very few birds on the mud out from the saltmarsh, they quickly learn that the tide will now flush them.
The waders were the typical residents for the saltmarsh area, mainly Redshank, Turnstone and a few Curlew. But also,
Grey Plover 2 on saltmarsh
Ringed Plover c30 on Red Nab - these are some of the Ringed Plover and Turnstone.
Middleton Nature Reserve
Just a quick check on the way home
Mute unchanged
Gadwall 8 on "no swimming" plus 2 on main pond
Teal 1
Mallard 1 male
Little grebe 1
Something spoked them from the far side, providing a reasonable view. No Teal on this clip though.
I was talking to Howard the other day, and he commented that last week when he was watching from shore out from the saltmarsh, the waders were eating gut weed. This is not something that I have ever seen (MD). But, as Howard pointed out, the minerals in seaweed are an essential part of the diet for many human cultures around the world and it makes sense that it is a natural part of a seabird's diet. He has seen this on many other occasions, and was kind enough to share this clip of last week's Dunlin, Knot and
Turnstone, all eating broken filaments of gut weed
Howard was also checking from Potts Corner yesterday as the heavens opened. Technically south of the recording area but he had watched the waders make their way up the beach from the saltmarsh. Made of sterner stuff than I, he managed this shot of a Dunlin in the peak of downpour. 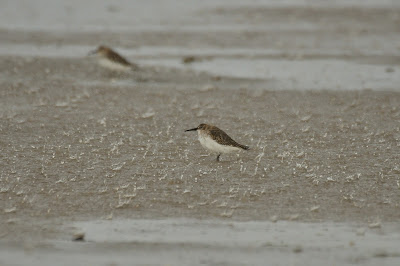