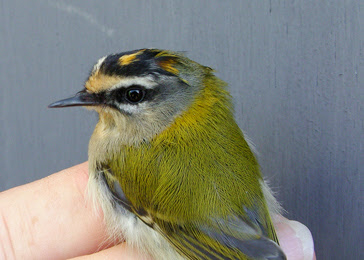 Today's Firecrest.  Thanks Reuben
Heysham Obs
Quite an 'open' morning, more so than yesterday - a bit fortunate to connect with a grounded 'scarce'!

Vis mig - this was hard - very hard! - not helped by having a mist net set deep into the vegetation below the Obs Tower.  Skylarks 'impossible' against the blue sky.  Combination of Tom Wilmer & Pete Marsh (Red Nab & NR respectively) with far more over the NR, moving NW to SE on the north side of the power stations than yesterday

Vis mig 0700-0930, after which intermittent
Tree Sparrow - 3+ (flock) south
Pink-footed Goose - 61 north
Swallow - 1 south
alba Wagtail - 61 SE
Siskin - c35 SE plus a couple of heard only registrations
Skylark - absolute minimum of 53 S but 12 of those registrations were of heard only (recorded as single)
Meadow Pipit - 164 SE
Grey Wagtail - 1 SE & one blogging
Chaffinch - 115 S/SW
Redwing - after initial departure of grounded birds, small numbers from the NE to SW totalling just 85 birds in dribs and drabs
Mistle Thrush - 7 SW, one E
Goldfinch - c25 S
Reed Bunting - 5 SE
Dunlin - flock of 9 S over NR (very unusual)
Carrion Crow - 5+2+5 S over NR with 220 southbound corvid spp, including flocks of 60+ & 50+ over Middleton NR, at least some of these being Carrion Crow
Coal Tit - flock of 23 SE over NR & at least 10 other birds in three groups