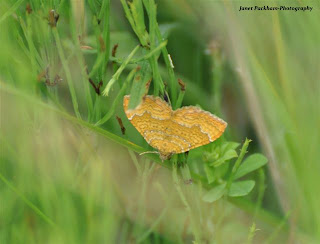 Yellow Shell at Middleton this morning. Thanks Janet

Heysham Obs
Pretty decent early morning conditions allowed both the Heysham and Middleton CES to progress.  I havn't the capture details to hand but Middleton suggested an extremely poor first breeding attempt for 'wetland species' which presumably found it a little too wet.  No Common Whitethroat or Reed Bunting were caught and just the one juvenile Sedge Warbler!  An apparently aimlessly wandering, intermittently singing, Grasshopper Warbler was eventually caught and represented the only encounter with this species.  This time last year saw good numbers of juveniles of all four of these species.   Miscellany included lots of young Wrens in the Heysham nets, a Blue Tit caught at Middleton which was ringed as a 2012 nestling on nearby Heysham Nature Reserve and further evidence that Reed Warblers are present in record numbers this year at Middleton, albeit only adults as yet.  Miscellaneous sightings included the following rather unseasonal observations:

Lesser Redpoll - one south over HNR at 1130hrs
Siskin - three separate well-spaced birds south over Middleton
Rook - two adults north over both Heysham and Middleton, harassed by the local Carrion Crows
Teal - one Middleton
Posted by Pete Marsh at 22:34 No comments: