Only my stuff so far, possibly more to come (MD)
Ocean Edge area - high water 08:45
The 7.9 metre tide is not high enough to cover the mud, but it does bring the waders closer in. Nothing exciting today but still plenty around the saltmarsh:
Shelduck c30
Wigeon 3
Little Egret surprisingly only 1
Lapwing 77
Knot 63
Grey Plover 1
Redshank c20
Oystercatcher c100
Curlew 6
Common Snipe 1
Rock Pipit 3 (2 on the rocky promontory on east side plus 1 on foreshore)
Linnet 48 - a big increase on recent checks
Middleton Nature Reserve "no swimming" pond
I just had a quick look before the rain became constant.
Gadwall 10
Shoveller 6 - I think this is the highest count from here. 2 female type birds plus 4 males in varying stages of eclipse/first winter plumage.
Little Grebe - at least 5 birds, probably more, including at least 2 in partial summer plumage. Pete advises that the influx is probably birds displaced by flood water in the river Lune/Conder.
Unfortunately, the refugees were not welcome!
Everywhere I looked one bird seemed to be chasing another.
Most were direct charges 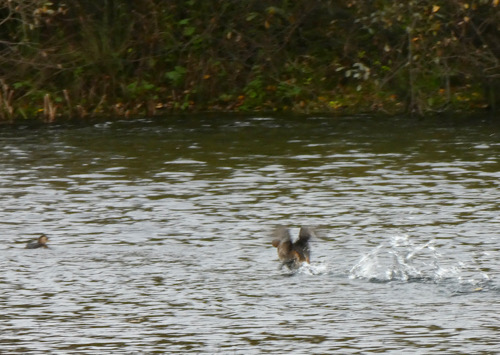 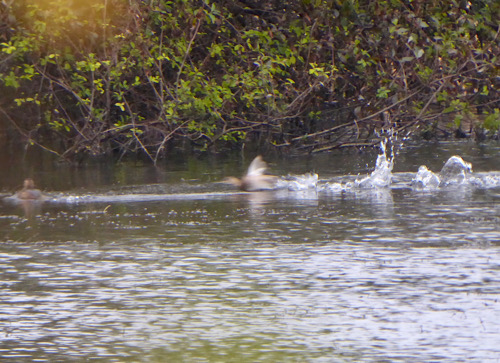 But these two appear to be setting off for a honourable duel
Posted by Pete Marsh at 20:29 No comments: