A choice this morning of whether to try marginal conditions for mist netting at Middleton with the possibilities of Grey Wagtail or below the old observation tower site on Heysham NR, where the rides have just been cleared out for exactly these conditions:  a possible fall ahead of a weather front on strengthening south-easterlies.  A shame both could not be covered in the circumstances, as Middleton saw quite a lot of movement in the bushes with the two mist nets catching "inefficiently" in the sheltered bits

Good numbers of waders were displaced by another gathering of vehicles out on Middleton sands but not a lot of activity ahead of the weather front in increasing winds!

Middleton NR
Black-tailed Godwit - one flew low to the south-east
Cetti's Warbler - singing male by the western reedbeed
Grey Wagtail - 5 SE (3 ringed)
Blackcap - 8 ringed and others seen
Chiffchaff - one ringed and at least on other calling
Garden Warbler - 2 ringed
Whitethroat - 1 ringed
Chaffinch - one ringed - unusual here unless this is the start of the (British) vis mig
Goldfinch - c60 in two flocks (2 ringed, one retrap)
Water Rail - one squealing 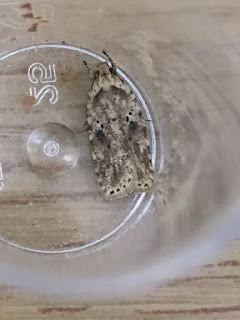