Willow Warbler - singing in the tank farm, perhaps the same as the other day

Ocean Edge
The intertidal waders on the incoming tide included:
Bar-tailed Godwit - 410
Knot - 1,950
too heat-hazy to sort out the gulls on the outfalls!!
Linnet - 12 on the football pitch

Butterflies
A male Orange Tip was along Moneyclose Lane early afternoon and a decent number of the hibernating species around the reserve: 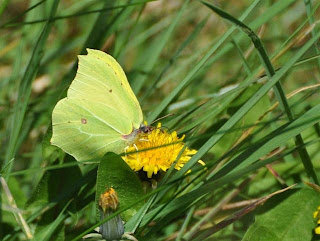 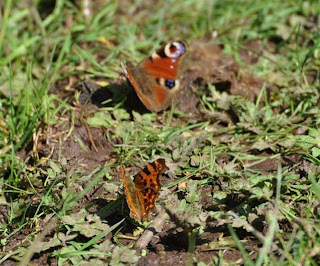 Taken around the reserve today by Janet.  Thanks for these.  Bit of a contrast with 1cm of hail in upper Hindburndale later in the day!

Moths
Slightly better than rock bottom with 13 moths including single Powdered Quaker and Early Thorn.  The pug caught on the night of 7/4 was, as expected a Golden Rod and as such the earliest county record - pic will be inserted on posting of 8/4
Posted by Pete Marsh at 07:47